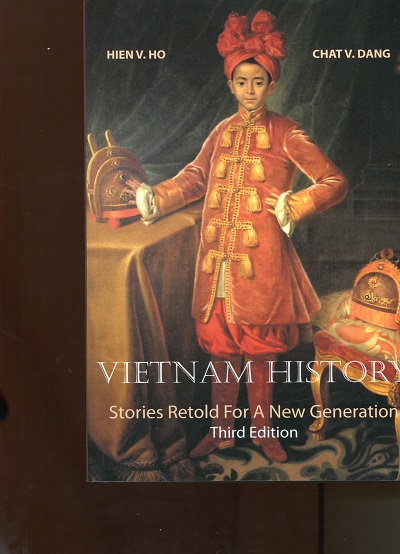 Stories Retold For A New Generation

STORIES RETOLD FOR A NEW GENERATION

(Speech made on 3-16-18 to Langley Viet, a group of Vietnamese American  students at Langley High School in McLean, Virginia and their parents.)

First of all, I would like to thank you all for having my wife  and me at this reception today.

It’s a great honor, and for me this is also a first. The first time I am invited to other people's home to talk about something that is very dear to me.

Actually, it’s not about me, myself, but we have to start somewhere where things began.

So let’s go back to our beginning in Vietnam.  As you must have known, I am not a writer nor a historian by training or profession, and obviously not a native English speaker. I learned the first words of English when I was 12-13 in a French high school in  Danang, Central Viet Nam. Vietnam was a divided country just emerged from French colonialism, and even South Vietnam survival was at stake. You might find it odd that we as students were thinking , studying in French while we lived our Vietnamese life when we came home. But you may also see the similarity with Vietnamese Americans who have to juggle between two different cultures at school and at home.

Let’s forward about  40-50 years and here we are, English speaking citizens of the most powerful country on earth. Every citizen in this country is responsible for the destiny not only of the US, but their action impacts the whole world. We are having children who grow up in a culture and environment totally different from the ones we lived in, that we lost when we left Vietnam but which never left our mind and our soul. (I saw my first snow when I was 35, my youngest granddaughter took and ate  snow for ice cream just during the last snowstorm). So we see a big gap there. You may call it a generational gap, a cultural gap, a language barrier, etc...We, the older generations, for sure must adapt, even assimilate to a certain extent, even simply for the sake of survival. But I doubt any of us ever left Vietnam usually in great danger, just for a comfortable life, just to become “hangers for coats, and pouch to contain rice” (gia ao tui com, Nguyen Du). We hoped for a better  future for our children. We want them them to have freedom, education, a life with meaning.

I am a doctor for babies and young people. I saw the children’s achievements but I also saw their parents’ occasional disappointments, second thoughts, isolation and longing for legacy. I feel the next generation’s poise , assertiveness and self confidence, but also I sense a long term need for a well rooted, strong knowledge of one’s past and a well based identity in a more and more diverse society.

Now let’s go back to what we mentioned earlier, that gap between us, between people who speak different languages, see the world in different ways, and when given even one single word,  who would understand it differently. Take the word “Vietnam” for example. For older people like us, our eyes would brim with tears just to pronounce that word. For an American- born or raised Vietnamese-American, Vietnam is just a small, third world country. If they remember some of the things from their history or geography classes, it’s about the Vietnam War. But, as the phrase now has become a cliche, actually it’s “ A country, not a war”.

For us, that’s not even enough, it’s not only a country, it’s a millenia old culture, it’s a language that took roots and that grew for centuries, a system of myths, beliefs and religions adapted to a geography and international contexts, a people that is the product, the fusion of three great cultures, The Dong Son Culture (600 BC-100 CE) influenced by  the Sinitic (Old Chinese) in the North, the Chams in the Center and the Khmer (Funan) in the South.

You are living in the most technologically advanced society in the world. But you are not coming from nowhere.

I know, hyphenated Americans, like Vietnamese-American, Korean-Americans, Asian- Americans are prone to be offended when some  “ American” ask them : “Where are you from?’ And they would retort “I was born here!” as an affirmation of their identity. But as you grow older, you may feel that not everything began with our birth. In traditional Vietnam, we did not count our age from the day we were born, we include the period the baby spent in it’s mother’s womb.  That’s where we all come from. Our larger womb is, according to a Vietnamese celebrated myth, the original pouch from our collective mother Au Co, the Immortal or Fairy (Tien) , containing one hundred eggs that gave life to one hundred sons, with 50 later leaving with their father the Dragon (Lac Long Quan) to live along the coast line, where the dragons (crocodiles) could be found. The other 50 would go with their mother to the nebulous mountains, land of the fairy.  That mythical origin of conception is a poetic way to describe the land, the people, the culture, the language where our parents, our ancestors came from.

- Not a book of dates and events, you can go to Wikipedia to get all the informations you need. - - Not history that is a reflection of  political or patriotic inclinations of the writers. We don’t hold any grudge and we don’t want to refight lost battles.

- Just “stories”, backed by facts when possible and with references, retold in the most unencumbered way possible, easily readable.

- And especially it’s written with you, the new generation of Vietnamese American in mind, not any new generation of Vietnamese who may be more ( like young people living in VN) or less (like those living in smaller countries with less international role than the US) involved in the history of Vietnam. The book first edition with about 285 pages appeared  in 2011. Seven years ago, there was almost no history written in English by American historians dealing with Vietnam over its entire span of existence. My co-author, Dr Dang Van Chat, and I tried to fill this gap , just intended for your generation. Current version of the book has been expanded, updated many times (only Amazon lets you do that); and it has about 400 pages now, with many additions and updatings. We are now working on a third edition.

The book begins with a comprehensive review of Vietnamese history according to new findings. Vietnam began as a separate entity known as Au Lac, which according to some interpretation means “ water” and “rice field”, which correlates with the Vietnamese “dat nuoc” as designating our own country.  It became part of a larger country named Nam Viet (179 BCE) which included present day Southern provinces of China. Then for a thousand years, it was annexed to the northern giant, which was known under the names of different dynasties, like the Han, the Yuan (nha Nguyen, the Mongols), the Ming , and the last dynasty from Manchuria who imposed their dominion over the whole Chinese Empire (the name China came into use since the 16th century in Western countries).

My co-author, Dr Chat studied extensively about the heroes of Vietnamese independence, like the sister Trung (12-43 CE) who gained a short lived independence  from the Chinese by fighting famous general Ma Yuan; Tran Hung Dao who spearheaded one of the very few victories anywhere in the world against the all powerful Mongol army under Kublai Khan; Le Loi who chased the Mings out after 10 years of war of resistance (a pioneer of modern guerrilla warfare); and Emperor Quang Trung Nguyen Hue (end 19th century) who vanquished a large Chinese army during a Lunar New Year offensive in 1789. Those are names which make every older Vietnamese beam with pride. Knowing them, young people will make us happy. Personally, I have a bias for lesser heroes and people who exerted a certain significant change to the Vietnamese cultures.  Lady Trieu is much less successful than the Sisters Trung. A 18 year old minority girl who rode an elephant fighting the Chinese, becoming for even Western women nowaday a symbol of women’s rights. She famously said: “I want to ride strong winds, trample wicked waves, slay the whales of the Eastern Sea, and not to imitate the common people, bowing my head, stooping over to become someone’s servant or concubine”. Alexandre de Rhodes was a French Jesuit who came to Vietnam in the 17th century despite religious persecution. He brought monotheism to Vietnam, and, more significantly successfully used the Roman script to transcribe the Vietnamese spoken language, and published the first dictionary of Vietnamese-Portuguese and Latin. The quoc ngu that we use now as official language was born, to later replace totally the Chinese Han characters.

One of my favorite characters is Prince Nguyen Phuc Canh, who went with a French Bishop Pigneau to Paris (1784) in the 18th century on the eve of the French Revolution.  The 4 year old prince was a darling of the ladies at French King Louis XVI court, where he also met with the American Minister to France Thomas Jefferson (and destined to become the 3rd US President) who was looking for a species of rice from Vietnam that could stand the weather of the Carolinas. He went back to Vietnam to fight with his father for the restoration of the Nguyen dynasty . He died before he father ascended the throne in Hue in 1802.

Other precocious heroes included Ky Dong, the “marvelous child” who led an uprising against the French colonialists. As punishment, he was sent off to Algeria, another French colony in remote Africa, to get a French education. Still a rebel when he came back, he was deported to the Tahiti Island on the Pacific, where he worked as a nurse, and became a friend of famous painter Gauguin, co authoring with him his last-auto portrait.

Another famous young man was emperor Duy Tan, enthroned at the age of 7, who led the revolt against the French at 13 years of age ( in 1916), was betrayed, and exiled to an island called La Reunion in the Indian Ocean. He later joined General De Gaulle and the Americans in the liberation of France and Europe at the end of World War II, then became a potential candidate to the Vietnamese throne with French support. He was killed  when his plane fell in the sky of Central Africa.

The lives of other Vietnamese who pioneered in language and literature are also reviewed. Such as Petrus Truong Vinh Ky, who published the first newspaper in quoc ngu (Gia Dinh Bao) but who was labelled as traitor in communist Vietnam due to his cooperation with French colonists.

All the rest are details that you may find written in the foreword of the book.

Thank you for your attention.